This one I’ll write in english so that my team mate Dominik and his lovely wife Melany could read easily.

A few month ago Dominik contacted me to invite me to race the 1st edition of the Xterra swimrun of Vallée de Joux. He was going there for a family trip and wanted to spice it up with a race. Since I live an hour from the lake, he thought about me. We’ve competed together at Evergreen XXL triathlon and knew that we had similar swim level. Dominik is a much faster runner, but he felt he would be under prepared for the swim and so we would be able to push one another on each segment of the race. Well that was the plan.

Dominik is a new father, he’s still very active but did not spend a lot of time in the pool. Well he went twice I think :)
I’m a soon to be divorced man, and decided to bury my sorrow not in drinks but in long distance triathlon racing, meaning that I had a lot of training under my belt, but also a lot of fatigue and a few injuries.
2 weeks before the race I told him I was a bit beat up and we decided that it wouldn't be a problem if it became a swim and walk instead of a swim and run.

Here comes race weekend, I meet Dominik the day before the race at the lake, and we have a short swim to check our pace. Indeed Dominik is way of his usual pace, but we think we can manage a nice 1’50/100m during the race.
Water is 22°c and we swam in our swimming trunk, feels like we can run the race like that tomorrow. We did bring our brightest and most colorful speedo, in order to honor the ancestral tradition of triathloning in this minimalistic piece of equipment.

Afterward we have a nice meal with Melany and Dorothea his 5 months old daughter.
Pasta and a beer, the perfect pre-race meal. If for whatever reason something goes wrong tomorrow, we can blame it on the beer ;)

I parked my van near the race start and slept there. The night wasn’t very restful, I had stomach cramps that woke me up a few times. But in the morning I was feeling pretty well.

I got to the race start and saw that they were already preparing the pig to be roasted for the after-race meal. Well seeing a dead pig embroched at 8 in the morning is a bit gross. We were a bit scared that the wait before the race will be cold in our speedos. But at 9am it was already sunny and warm enough, so no more worries.
Before getting on the bus, we took the time for a few pose to show all the other competitor who are the boss of style here. 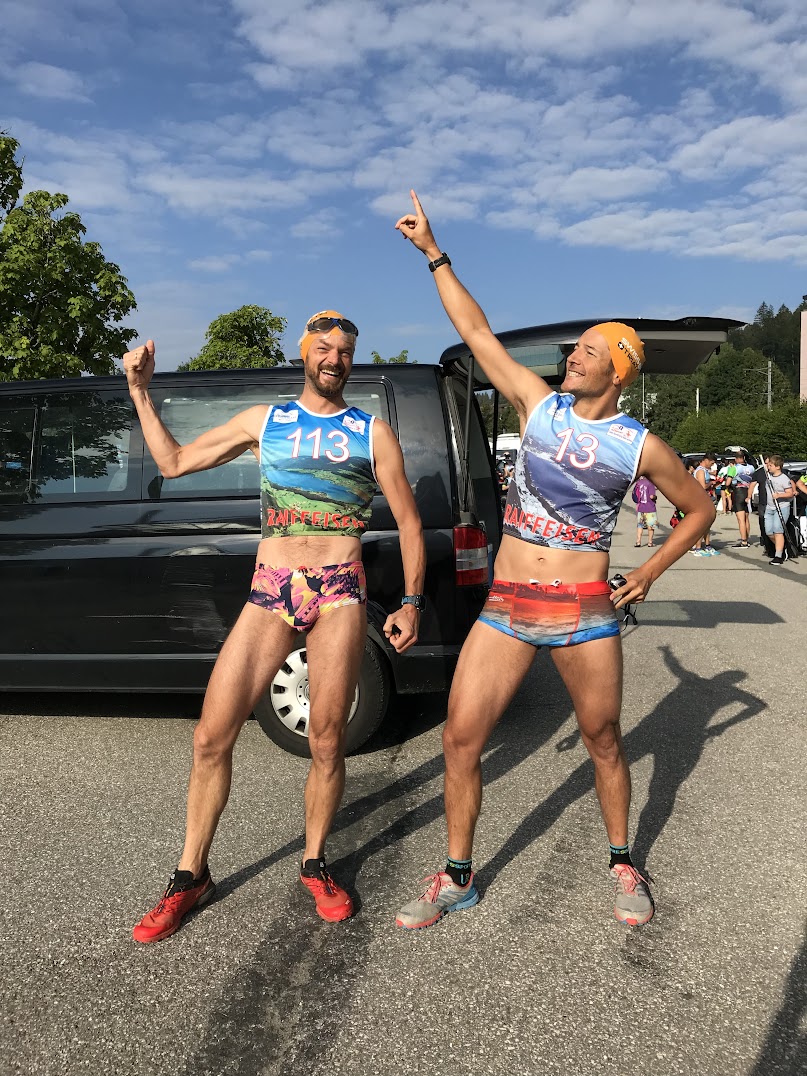 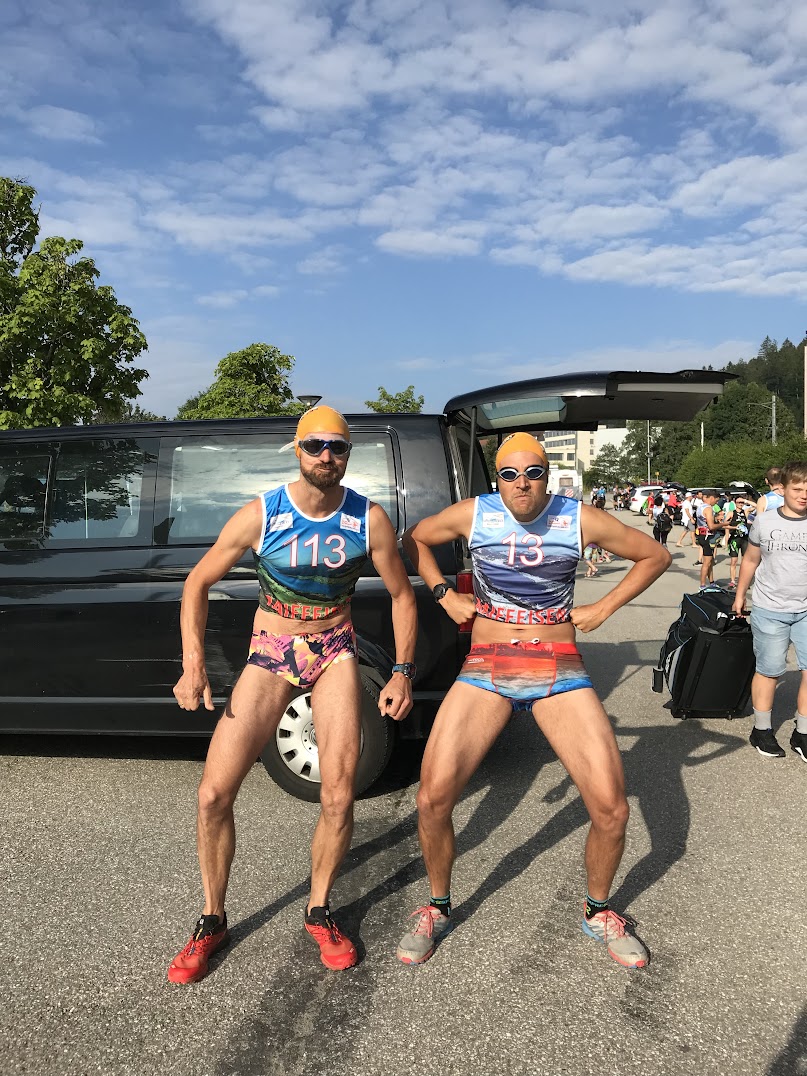 All the other teams were wearing trisuite or neoprene wetsuit, pullboys, buoyancy socks etc … We were the only old school classic style team. Pretty proud of it.

Then we took the bus and got to the race start.
Very nice settings. A small lake in between mountains.

And it was time to start racing.
So I was running in front to set the tempo, and Dom would do the first swim in front to pace himself, and then I would get in front to keep the pace and allow him to benefit from my draft.

And here we go. We are in the middle of the peloton and I take the left side to pass. A front group formed and is breaking away from me. I’m leading the 2nd group.
We hit the water after 500m and our “equipment” allows us to have a very fast transition, we just put the goggles on our eyes and dive.
Dom get in the front and swim, the pace seems a little bit faster than yesterday, but he told me that usually with the race energy he’s always faster than in training. Nice, let’s go.
The short run allowed for teams to be spread out. We’re not alone but there’s not too much traffic. The pace is perfect for me and I start to catch up Dom to get in front.
And then he stops, put his head off the water and breath hard. He does not feel well.
I do a few backstroke to still advance but keep an eye on him and he does the same. After a few movement he gets back into crawl and we restart. I set an easier pace and look often behind me to check on him. Now he’s breaststroking. Hoho, not good.
That first swim is short and we exit the water. Dominik tells me he couldn’t get into a rythm and feel awfull.
Problem is the run segment is quite small and we dive again for a long swim. Our transition is perfect again and we start swimming again. I’m in front and try to set a very easy pace. Dominik seems to follow without issue so I put my head down and swim.
But has I check on him I see that he’s struggling, and here comes the breaststroke again. I slow down a bit so he can follow me and we keep on going all the way to the other side of the lake.
When we got out of the water, I see that we are in the middle of the pack. And now it’s time to run.
I have no idea how fast I can run, so I keep it easy around 5’/km Dominik is just behind me, trying to recover. I hear that he’s got his breathing under control and accelerate a bit. I feel like I can run 4’50 easy. Dominik tells me that the pace is ok, but he’s got a side pain in the belly. I told him we can run so he recovers but he answers that I should keep it steady and he would recover. Ok then, let’s run steady.
And we start to pass some teams. I feel very well on the run, no pains anywhere, wonderful weather, perfect temperature to run in a speedo.
We go by some spectator and they cheer us pretty loud, thanks to our outfit.
We pass another team and I look behind me to check that Dominik is with me because the path is pretty narrow and blahm, I crash into a bush on the side.
The team we just passed burst into laugh, because the tall guy in a speedo just crashed into a bush :)
I didn't even fall, but I ended with a few scratch on my thig and arm. Didn't feel a thing until the shower after the race. Well Dominik was there behind me and smiling, so we continued running.
And here comes the next swim after 2k. I stop running about 20m before the swim to check on Dominik, he tells me he’s feeling better but he’s not enjoying himself. Too bad :(

The swim is shorter and Dominik alternate crawl and breaststroke again. The team we passed on the run pass us on the swim. Well it’s very nice for me because I can really recover from the run. The water is fresh but not cold, and I enjoy the view on the side of the lake.

And here comes a run segment again. It’s the long one: 4km. I’ve had no issue with my TFL since the start and still feel pretty after this swim, so I decide to speed up a little and try to maintain 4’45/km. Dominik is feeling better and tells me that he’s recovering during the run.
So our new race plan is to push ourselves on our weakest sports and then recover on our strongest. Well that works too.
We pass other teams again and thanks to our speedos, we even get cheers from our competitors.
And here comes the second to last swim. Looks pretty long again. Same tactics from Dominik, that gets to the other side in better shape than the other time, and here we run again. And we pass the same teams again for the third time.
This is a short run and here comes the last swim. Come on it looks quite long again. Swimming starts to get harder for me, and Dominik is now just behind me without me having to slow down. Those 2 ironman in a month starts to weight on me.
We exit the water around a lot of people, and here comes the run again. 3.5km to go. It’s time to run fast. I’m pushing to the max of my current abilities 4’35 now. Dominik feels pretty good now and tells me I can accelerate if I want. Sorry Dominik, I’m already maxing it out.
We pass the usual teams, and then reel in some new ones. We manage to get 2 other teams, and there’s one not to far away from us, but my legs are dead. It’s a big effort just to keep the pace, no way I can go faster.
And here comes the finish line. Melany and Dorothea are waiting for us. And done.

1h46min of swimrunning, no walking my friends, and no pain. That’s cool.

We end up finishing 15th scratch over 54 teams. That’s much better than anticipated. In the end Dominik really enjoyed himself and so did I.

Now time to get a few beers and taste this roasted pig. 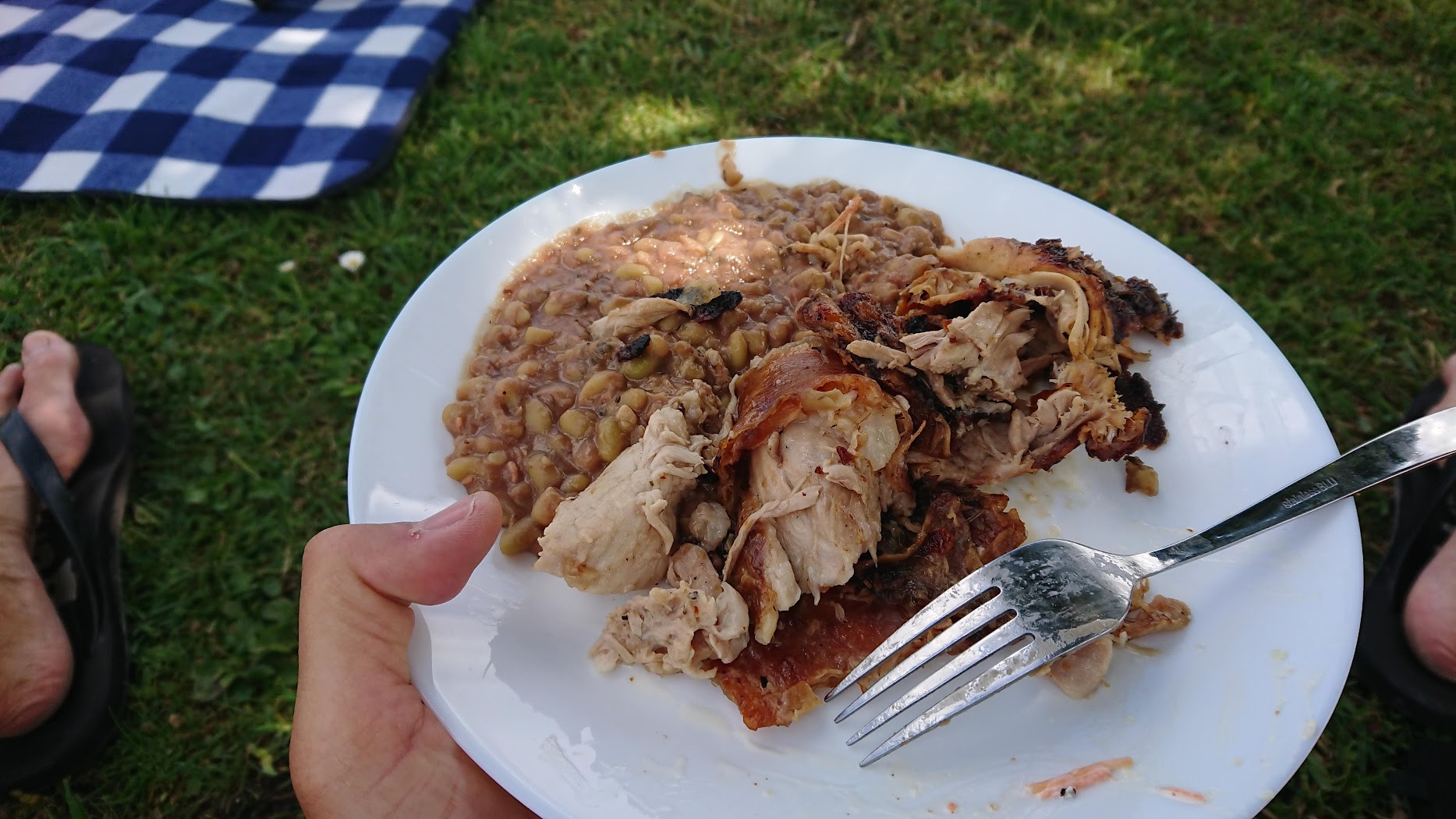 Plans were made, we may be doing Engadin swimrun as a team in 2020. And Dominik, if you need a support team anytime, just call me!